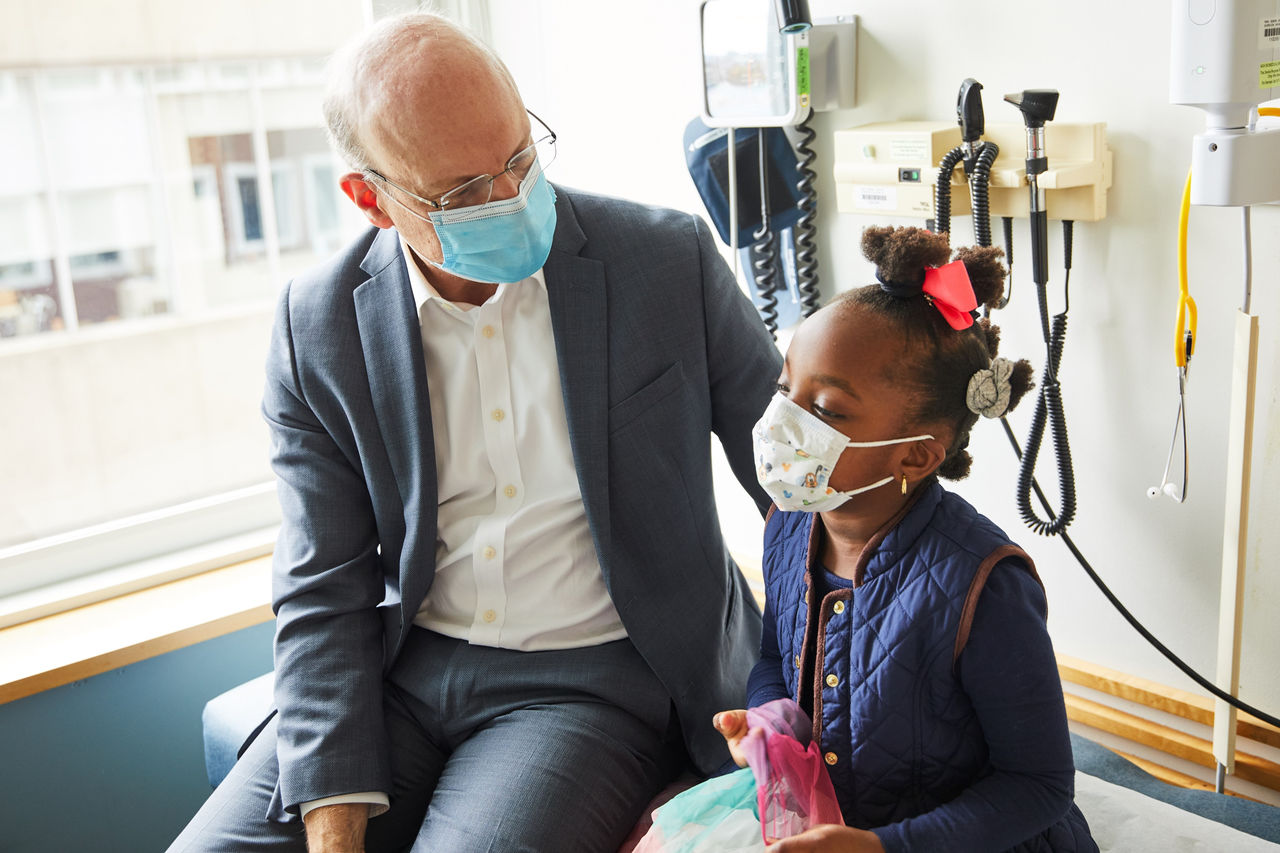 The second installment in a series of articles commemorating the two-year anniversary of Mass General Brigham’s United Against Racism initiative.

This year, there were countless projects across the system aimed at combating racism and fostering more equitable healthcare delivery. Some of the most intensive initiatives involved clinical quality improvement projects. These 18 projects backed by the United Against Racism initiative were created by a variety of departments across the system — orthopedics, neurology, pediatrics, and more — with the aim of reducing racial disparities in patient experience or outcomes within the Mass General Brigham system. While each project is unique, there are some connecting themes in the accomplishments from the past year:

Patients with limited English proficiency (LEP) account for about 8 percent of the population in the United States. They have been consistently shown to receive lower quality care than English-proficient patients on measures such as understanding treatment plans and disease processes, satisfaction, and incidence of medical errors. Mass General Brigham has prioritized translating patient education materials, questionnaires, and other medical documents in addition to hiring staff members who speak the same language as our patient populations.

A key part of executing this strategy was the creation of a system translation team, which includes 12 translators dedicated to improving patient care and the patient experience by expanding the availability of translated content.

One of the largest undertakings by this team was the translation of Patient Gateway and a suite of more than 1,000 patient questionnaires (totaling 6,000 unique translations) into the six languages most spoken by our non-English speaking patients: Spanish, Portuguese, Haitian Creole, Russian, Traditional Chinese, and Arabic. This included translating more than 8,000 files from more than 12 servers. Patients can now toggle between languages included in their Patient Gateway questionnaires, providing valuable information from which their care team can provide better care.

“For someone who doesn’t speak English as their first language, having something available in their native language can help ensure they are understanding and getting the same care that English speakers are,” says Lee Park, MD, Chief Patient Experience Officer, Mass General Brigham.

Translation is only the first step towards better patient materials. Teams across Mass General Brigham were also committed to refreshing patient materials to be more culturally competent. The goal is to focus on the patient voice and identity so they can see themselves represented.

In one example of many from across the system, the Orthopedics departments at the Brigham and Mass General identified that joint replacement rates are lower for Black and Latinx patients across the system. After adjusting for other demographic variable, the teams believed these disparities were partly caused by the differences in the utilization of decision-making aids among these populations.

The team implemented culturally competent informational videos for hip replacement (total joint arthroplasty) that were both offered in Spanish and incorporated individuals of color into the programing. After watching the video, patients reported an increase in positive attitudes towards surgical treatment and a significant decrease in fear for surgical complications.

For example, a community health worker serves as a mediator between a patient and their primary care team. Their position is unique; they are hired because they share the same lived experiences, culture, and language as the patients they are serving. As part of their role, community health workers help patients understand their care plan. While not trained to offer clinical advice, they help communicate and escalate a patient’s health concerns. They are also trained to help identify any barriers patients are facing in receiving care and connect them with community resources.

Rosa Polanco has been a Medical Assistant for over 26 years. Now engaged as a community health worker at Pentucket Medical Haverhill, she spends much of her time helping improve hypertension for patients for whom previous interventions have not worked.

“I help patients with everything from teaching them to use their blood pressure monitoring devices to discussing their diet and exercise recommendations,” she says.

Doulas are another example of unique care team members supported by the United Against Racism initiative. Doulas are trained professionals who provide continuous physical, emotional, and informational support to their client before, during, and shortly after childbirth to help them achieve the healthiest, most satisfying experience possible. The Mass General Brigham Birth Partners program is a pilot that uses Doula support to help foster better pregnancy outcomes for those at highest risk.

Many patients spend weeks or months waiting to be seen by specialists. Access barriers like transportation issues, scheduling conflicts, and language barriers can pile up, preventing patients from receiving everything from preventive screenings to life-altering services. Many of the clinical United Against Racism programs are focused on creating better pathways to care while mitigating racial bias and social risks. These specialties and refined care pathways are varied — from making it easier for Black children with autism to get an appointment at The MGH Lurie Center for Autism to providing equitable access to world-class urologists to reduce prostate cancer sickness and death.

Another example is the Ophthalmology Community Outreach program. This framework, developed by Mass Eye and Ear clinicians, aims to increase the number of at-risk individuals in vulnerable communities who receive preventive eye screenings for diabetic retinopathy.

Early detection of diabetic retinopathy has been proven to prevent retinal disease, the primary cause of preventable blindness in the United States. Yet at Mass General Brigham, 88% of those with diabetes did not have a dilated eye exam in a one-year period — amounting to over 210,000 patients.

By working with community-based primary care centers, ophthalmologists were able to “meet patients where they are” in the community. At-risk patients coming to the health center for a visit with their primary care provider or a specialist are identified using medical record data and offered on-site imaging during their visit. Or, if it’s more convenient, the opportunity to schedule an eye screening visit at another time. Using a high-resolution camera, photos of the retina can easily be taken in the clinics without eye dilation. An ophthalmologist at Mass Eye and Ear then reviews the images before sending a report to the patient’s primary care provider. If retinopathy or other eye concerns are detected, a follow-up exam is scheduled with a specialist. In the first year, the program screened over 450 patients who would likely not have been screened otherwise.

Using data to identify at-risk patients in our clinics is just the tip of the iceberg. Our researchers use data to illuminate longstanding racial inequities in healthcare and help guide our clinicians towards initiatives that make the greatest impact for marginalized communities.

For example, data shows that racial and ethnic minority groups throughout the United States experience higher rates of illness and death across a wide range of health conditions — including diabetes, hypertension, obesity, asthma, and heart disease — when compared to their White counterparts. Additionally, the life expectancy of non-Hispanic/Black Americans is four years lower than that of White Americans. The COVID-19 pandemic and its disproportionate impact among racial and ethnic minority populations is another stark example of these enduring health disparities.

We hope to address some of these disparities through our United Against Racism clinical initiatives. For example, there are significant differences in blood pressure prevalence and control rates based on race/ethnicity. Since February 2022, Mass General Brigham has rolled out several initiatives that have led to a 3 percent absolute improvement in rates of blood pressure control for Black and Hispanic patients. This is a remarkable improvement in the context of how difficult it has been to make objective progress in this area.

This is just a small sample of the incredible work across the system to combat healthcare inequities. For a deeper dive into this strategy, we recommend reading our interview with Dr. Allison Bryant Mantha, Senior Medical Director for Health Equity at Mass General Brigham.

In our next article, we’ll be looking at how we’re bridging the digital divide — both in the use of technology to combat inequities and in the approach to make these tools as inclusive as possible.

If you missed it, read our previous installment: Building a Better Workforce in Safer, More Welcoming Environments along with our interview with Rose Sheehan, Chief Human Resources Officer, and Carla Carten, Interim Senior Vice President and Chief Diversity, Equity & Inclusion Officer. You can also find the United Against Racism two-year anniversary reflection from our CEO, Dr. Anne Klibanski.