How Athletic Taping Can Help Cut Your Risk of Foot Injury

Whether or not you've ever sported tape, you've definitely seen ankle taping in action. You're watching a professional game or Olympic event, an athlete takes off their cleats, and there they are—two ankles fully bandaged in a white athletic tape wrap. And here's the thing: There's no apparent foot injury or ankle sprain.

Here's everything you need to know about how athletic taping can help prevent ankle sprain and foot injury.

"Think of tape as like a more mobile version of a boot, cast or brace. Sprains usually strike when a joint goes into excessive range of motion, stretching the ligaments beyond their capacity. Taping attempts to prevent your joint from going into these risky ranges of motion."

Athletic taping primarily works by keeping your joint from moving too far in any one direction. Think of tape as a more mobile version of a boot, cast or brace. Sprains usually strike when a joint goes into excessive range of motion, stretching the ligaments beyond their capacity. Taping attempts to prevent your joint from going into these risky ranges of motion.

Because ankle joints are particularly vulnerable to injury, they are the most common areas that trainers and physical therapists tape on athletes.

Even as relatively small joints, your ankles do a tremendous amount of work supporting your entire body weight and propelling your body in whatever direction you need to go. Because they're such mobile joints, it can be easy for them to twist and turn just a little too far, resulting in sprains and strains.

Increasing proprioception, your ability to sense your body's position in any given environment, may also play a role. Proprioception is sometimes called the "sixth sense." For example, quickly changing directions and sprinting across an uneven grass field in soccer requires a certain degree of proprioception to avoid falling or injury. By enhancing this sense, you can improve balance and help better control your feet and ankles during sport activity.

Some types of taping also add compression to the joint to reduce swelling following an ankle or foot injury and lower the risk of reinjury.

There are many different types of athletic taping, but there are two main categories:

Still, it appears to provide benefits. Studies comparing the different types of taping have found that elastic taping resulted in a lower rate of ankle inversion compared with inelastic taping.

For the best tape job, talk to your sports medicine physician, athletic trainer or physical therapist. They can do it for you or even give you a quick, expert tutorial so you can wrap in confidence. But to get you started, keep these strategies in mind:

Once you have the tape on, squeeze each individual toe. When you let go, your normal skin color should quickly return. If it doesn't, loosen things up. 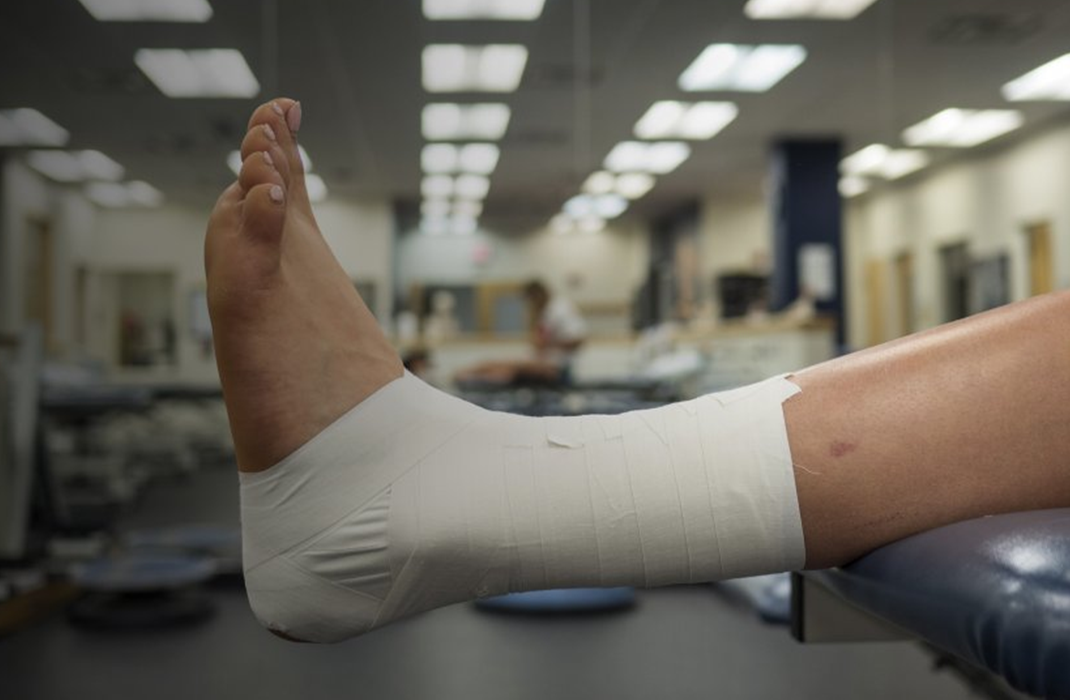 Request an appointment, or learn more about Sports Medicine at Mass General Brigham and the teams we treat.

Request an appointment Why choose us? Teams we treat